The Hon Ken Wyatt AM MP

The Hon Ken Wyatt AM MP 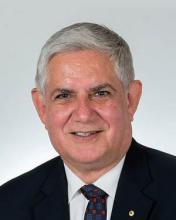 Ken Wyatt was elected in 2010 as the Federal Member for Hasluck, an electorate South East of Perth, making history as the first Indigenous Member of the House of Representatives. In September 2013 he became the first Member for Hasluck re-elected for a second term. Since his election to Parliament in 2010, Ken Wyatt has worked tirelessly to be a strong advocate for his electorate and to help build a stronger local community.

In 2015, Ken Wyatt again made history as the first Indigenous member of the Federal Executive, after being sworn in as the Assistant Minister for Health. He was responsible for Aged Care service delivery and implementation, as well as for Dementia Care. Ken also had Ministerial responsibility for the Organ and Tissue Authority, which is an independent statutory agency within the Health portfolio.

Before entering politics he worked in community roles in the fields of Health and Education as a Director in New South Wales and Western Australia.

Not only has Ken Wyatt had an extensive career in health and education, he has also made an enormous contribution to the wider community in training and mentoring young people. This was recognised in 1996 when he was awarded the Order of Australia in the Queen’s Birthday Honours list. In 2000, he was awarded a Centenary of Federation Medal for ‘his efforts and contribution to improving the quality of life for Aboriginal and Torres Strait Islander people and mainstream Australian society in education and health’.

Hearing the voices of tomorrow’s Elders to Close the Gap

National Agreement on Closing the Gap